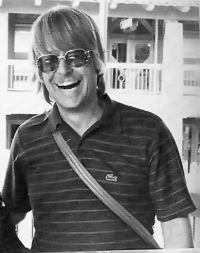 For more than thirty years he has taught two college level courses in the History of Rock n Roll music. He continues to teach the History of Rock and Roll music on the Internet. In a distinguished academic career, he has also taught at the University of California, Davis, the University of Arizona, Cochise College and Chabot College. In addition to these teaching assignments Professor DeWitt is a regular speaker at the Popular Culture Association annual convention and at the National Social Science Association meetings.

He wrote the first book on Chuck Berry, which was published by Pierian Press under the title Chuck Berry: Rock N Roll Music in 1985. DeWitt’s earlier brief biography, Van Morrison: The Mystic’s Music, published in 1983, received universally excellent reviews. On the English side of the music business DeWitt’s, The Beatles: Untold Tales, originally published in 1985, was picked up by the Kendall Hunt Publishing Company in the 1990s and is used regularly in a wide variety of college courses on the history of rock music. Kendall Hunt also published Stranger in Town: The Musical Life of Del Shannon with co-author Dennis M. DeWitt in 2001. In 1993’s Paul McCartney: From Liverpool To Let It Be concentrated on the Beatle years. He also co-authored Jailhouse Rock: The Bootleg Records of Elvis Presley with Lee Cotten in 1983.

Professor DeWitt’s many awards in the field of history include founding the Cochise County Historical Society and recognition by a number of state and local government organizations. DeWitt’s book, Sun Elvis: Presley In The 1950s, published by Popular Culture Ink was a finalist for the Deems-ASCAP Award for the best academic rock and roll book.

Professor DeWitt is a renaissance scholar who publishes in a wide variety of outlets that are both academic and popular. He is one of the few college professors who bridge this gap between scholarly and popular publications. His articles and reviews regularly appear in Blue Suede News, DISCoveries, Rock ‘N’ Blues News, the Journal of Popular Culture, the Journal of American History, California History, the Southern California Quarterly, the Pacific Historian, Amerasia, the Western Pennsylvania Historical Magazine, the Annals of Iowa, Journal of the West, the North Beach Review, Ohio History, the Oregon Historical Quarterly, Record Profile Magazine, Audio Trader and Juke Box Digest among others. For forty plus years DeWitt has combined popular and academic writing.

During his high school and college years, DeWitt promoted dances in and around Seattle, Washington. Such groups as Little Bill and the Bluenotes, Ron Holden and the Playboys, the Frantics, the Wailers and George Palmerton and the Night People among others played at such Seattle venues as the Eagle’s Auditorium and Dick Parker’s Ballroom.

Howard has two grown children. A daughter, Melanie Stoa, is a teacher in the Los Angeles area and a son; Darin completed graduate work in public policy at the London School of Economics and is presently completing a PhD in Political Science at the University of California, Los Angeles. His wife of thirty-eight years, Carolyn, is a teacher and artist. She is presently retired and vacationing around the world. The DeWitts divide their time between Scottsdale, Arizona and Danville, California.

@1stEstraMy name is Howard A. DeWitt. I am finishing my 4th book on Van Morrison. Any chance of a phone interview about your Marin County time with Van. I have secondary information and would love to talk to you. Look on Amazon I have 34 books of varying quality Howard217@aol.com

My new book Trump's Plot To Destroy Democracy is two weeks away. It will be on Amazon.