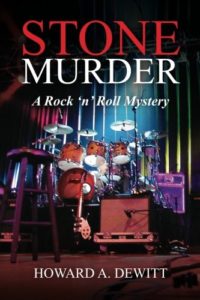 The Rolling Stones are followed on the road by the Start Me Up band covering Stone’s songs. They are making millions of dollars and someone wants to end their career.

After three Start Me Up drummers are murdered, Trevor Blake III and his partner, Guitar Jac, are hired to solve the mystery. Inside the rock and roll world, Trevor finds one roadblock after another obscuring the truth. He call on his friend, Gino Landry, a gay San Francisco Mafia don, they discover that sex, drug and rock ‘n’ roll hide the killer. San Francisco Fillmore Auditorium and Los Angeles’ Whiskey A Go-Go provide the backdrop to this exciting debut mystery. Trevor Blake III is in the middle of an action packed drama. He employs tactics he had learned from Elvis Cole and some old time detectives, Red Diamond and Shell Scott, to solve his first case.

It is a dynamic mystery with comical overtones and a surprise ending.

Retweet on TwitterHoward A. DeWitt Retweeted